So after attending three scrimmages and one junior high game, I vowed to never take both boys back to a football field again. At least not until they’re sixteen and fourteen. In true fashion, I changed my mind. Around 7 pm, both of my mini-men had been pleasant, cooperative, and kind, so I figured, what-the-hey, let’s go see Dadda at the football field. Let me just say, this is no easy feat. To the momma’s who can cart around multiple young children in public places, I applaud you. I’m not good at it. I avoid it, and when I get the courage to try again, I’m quickly reminded–once at the public place I’m attending–just why I’d rather go alone or not at all.

My oldest is eager to run. He really only has two speeds–a snail’s pace or a sprinter. Neither is conducive to walking through parking lots. Thankfully, he’s usually eager to get to the “football field” to see Dadda, and will go in happily and without a fight. Leaving, however, is a whole other blog post! My little man is usually content, easy-going, and will just observe everything around him without much of a fuss. Game One was an exception to that rule.

I loaded up toys, treats for bribery, extra undies, dipes, wipes, stroller, wagon, blankets, and water bottles. We arrived, fashionably late, at the beginning of the 2nd quarter (no WAY was I insane enough to sit through a whole game). We found a parking spot in the grass, and started the trek into the stadium (I kinda chuckle at calling it that though since it’s more like a field with some lights and metal benches). After seeing the “stadium,” I decided against the stroller or wagon and decided to just chance carrying little man and having my big guy follow along. (All the while, praying that Jesus would watch over my big guy, because God only knows how many times he’s going to dash away from my sight.) We made our way through the gate with lots of smiles–not gonna lie, my guys are quite a site with their coordinating t-shirts and cuteness. As soon as we entered, I could see I was in for a nightmare or a night of faith. EVERYWHERE there were blankets, chairs, and children running around. Chaos in the endzone. My favorite. {note: sarcasm} There were even two fire trucks just to distract my oldest from the goal: get to the visitor side, see Nana, find Dadda, and head back home. We never made it to the stands. An hour and half later, we said bye to Dadda at halftime. Little man SCREAMED when people cheered for our team. My big guy thought he was WAY bigger than he is, and wrestled around with 2nd and 3rd graders the whole time. I just prayed. A lot.

At the half, I regret I had a TERRIBLE, woe is me attitude and let my hubby know it. I informed him that I was done having his babies. (although I’m not retracting that statement just yet) He reminded me it’s just a stage of life, and on the ride home, listening the screams of my boys–one was exhausted and hungry, the other realized he left his two green cars at the field–I realized just how selfish I was being.

I am blessed. Beyond measure. Sure, attending football games, might be hard (understatement), but I am loved by the Lord of creation, I have an amazingly supportive husband, who coached another win, and two of the most precious people in all the world as my sons. How inconsiderate of me to complain that one may scream like he’s dying when a touchdown happens or the other might run off with heathen, tea-bagging third graders (Note: I wouldn’t let that happen {on purpose}.) So, after a difficult Game One, I’m ready for week two. Granted, I won’t get to attend that game, so maybe that’s part of why I’m so upbeat and optimistic. 😉

Here are some fun pics from Game 1… 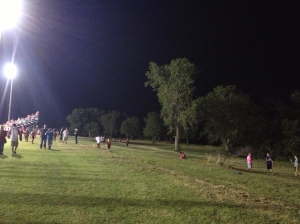 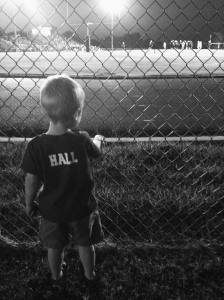 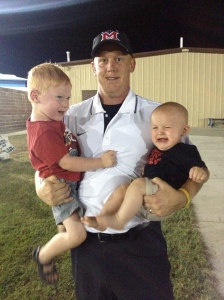 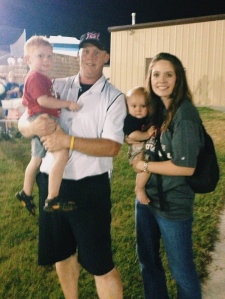 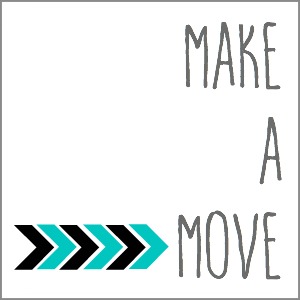 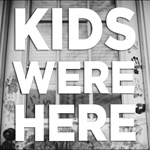